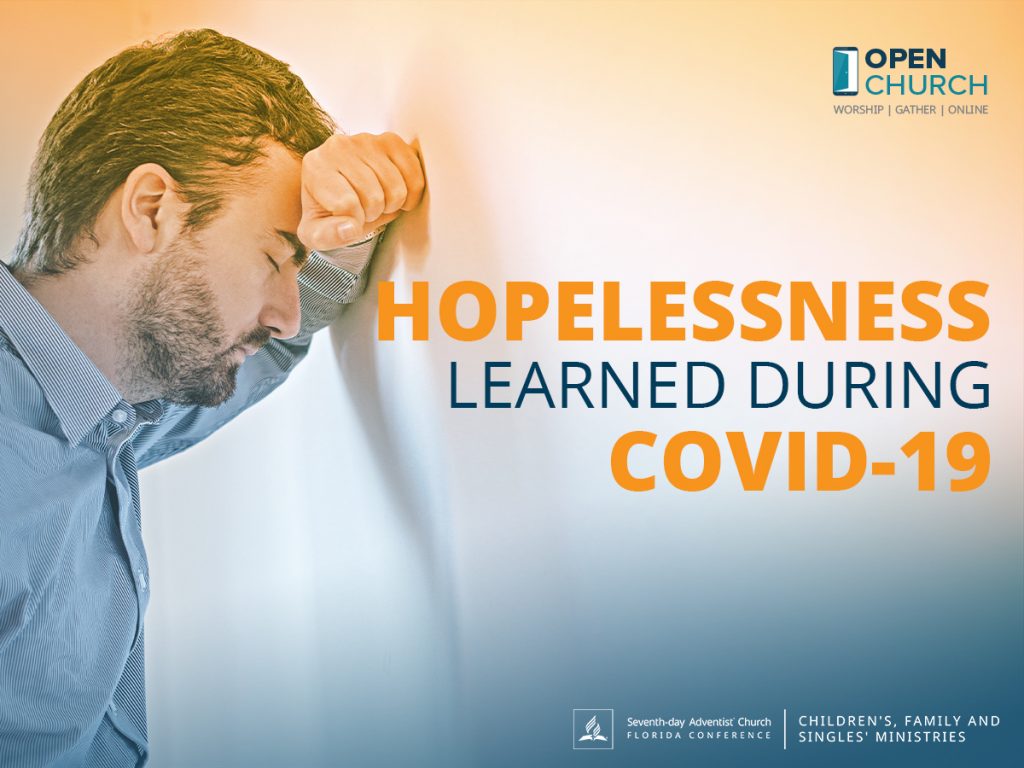 There is no doubt COVID-19 could mark the defining moment of this generation. What is happening in the world, and specifically in this country, is unprecedented. We cannot escape news, updates, daily and weekly statistics, and projections for the future. For some people, being heroes is the way; for others, it is an opportunity to do business; however, for others, it is a sad tragedy.

I do not know what your experience is; but even with observing the news and reading the many contradictory reports from government officials, at the end of the day, the fact is there is still no cure for COVID-19. This is making many people think nothing can be done, so why should they try to do something? They say: “I just need to stay home and wait for this crisis to end.” Many people are developing what we call in psychology a learned hopelessness. This means that when nothing seems to work, then you can decide to be passive and just do nothing. This condition causes emotional or physical pain every day to millions of people.

Learned helplessness was demonstrated in animals by two psychologists: Martin Seligman and Steve Maier. When electric shocks were applied to one side of the cage, the animals would jump to the other side. Eventually, when both sides of the cage received electric shocks, the animals stopped fighting,   looked for solutions, and collapsed before the uncontrollable.

A wide-ranging research program made it clear that the determining factor of such a syndrome was the uncontrollability perceived by the animals and not the stress of aversive events. This means that if the animal receives aversive stimuli, such as electric shocks, but can put an end to them by pulling a lever, spinning a wheel, jumping from the cage to another place, or using any escaping behavior that gives it a sense of control over the unpleasant situation, then it will not develop such hopelessness.

Now, if the animal cannot escape as it is simply exposed to the stressor without succeeding when doing something to put an end to the unpleasant stimuli, then the animal will develop defenselessness. For example, it will no longer try to escape from other aversive events, but it will passively remain “enduring” the discomfort instead; although, with just one simple movement, the animal could leave. It will also show little interest in a sexual partner in heat and even in feeding. Its behavior rate will be decreased; he will appear quiet and lethargic with no motivation to initiate almost any behavior.

Learned hopelessness is a theory for depression, sadness, and people who are giving up on life. Hopelessness is considered a regret, a disease, and a curse of great limiting power. Nietzsche, the philosopher, considered it “the modern soul’s disease.” It can be said it is a state in which love, trust, enthusiasm, joy, and faith are weakened or extinguished. It is a type of frustration and helplessness in which people have the tendency to think it is not possible, by any means, to achieve a goal or to fix a situation that is perceived as negative. It is a way of considering oneself: trapped, overwhelmed, and defenseless at the same time.

We need to clarify the difference between hopelessness, disappointment, or despair as we could easily confuse these terms. For example, disappointment is the perception of a disappointed expectation while despair is the loss of patience and peace, an anxious or distressing state that makes the future a frightening possibility. On the other hand, despair, on its own, is the perception of a present impossibility, the idea that there is nothing to do, not now, not ever, and the subject surrenders to uncontrollable rifts. It is precisely that absolutist sense that makes it appear as a harmful and destructive state for the human mind.

When God called Moses from the burning bush, I think Moses was suffering from a condition of learned hopelessness at that point in his life. Moses was 80 years old when God called him to do something extraordinary. However, Moses considered himself as someone who had reached the end of his journey and that he had nothing else to offer. Moses had already given up on life. He had fled from the most powerful king on earth. His dream of becoming a pharaoh was over. His dream of becoming the liberator of his people had failed miserably. He ended up living with Jethro and marrying Zipporah. Now, we see Moses, 40 years later, shepherding someone else’s sheep. He owned nothing besides having a wife and children. For that reason, he gave up his dream, passion, and decided to live passively without even trying to escape or fight against his circumstances, because he had nothing else to do but adapting to his condition of learned helplessness.

The sad part of all this is that Moses gave up his call to be the liberator of his people while the Israelites were still suffering in Egypt. On the one hand, I see God saying: “I have surely seen the affliction of my people which are in Egypt, and have heard their cry by reason of their taskmasters; for I know their sorrows.” On the other hand, I see a tired Moses: tired of trying, surrendering to his adverse circumstances, and living with a condition of learned hopelessness.

What I love about this story is that God called Moses out of his learned despair when he was 80 years old. Let me stop here. Perhaps, the circumstances surrounding our lives tell us there is nothing else we can do to help those who suffer. If the government does not know what to do about this crisis, what else can we do? Despite our distorted cognitive thoughts, God is calling us to fulfill His mission. The same way God was not done with Moses when he was 80 years old, He is not done with us yet.

Let me tell you about two people who did not give up despite their adverse circumstances:

Claudius, a Roman from a noble family, suffered several health problems throughout his life. He averted the murder of his family, because nobody thought he was a threat. Later, he became the emperor, conquered Britain, which was considered impossible to conquer at the time, and he became one of the greatest rulers of ancient Rome.

Franklin D. Roosevelt was elected President of the United States four times despite being paralyzed from the waist down after he got sick with polio. To run for public office, he learned how to walk a short distance using a cane while using iron clamps, and he was very careful never to be seen using a wheelchair in public.

What should you do if you are experiencing a learned hopelessness in the midst of the crisis?

You cannot let the adverse circumstances you are living in today define your future and the history the next generation will receive. God has given you the ability to rise from your ashes. You can do all things through Christ who strengthens you. You have lost your job, lost a loved one, and you see there is no solution, but do not give up. God is by your side and is your Shepherd, and even though you walk through the valley of the shadow of death, you will fear no evil because God will be with you.